Cultivating “a certain warmth” inside 550 Madison, one of Manhattan’s quirkiest towers

550 Madison Avenue (born the AT&T Building, most recently Sony Plaza) is one of the most recognizable figures on the New York skyline. Designed by architect-provocateur Philip Johnson, the 37-story skyscraper stands out for its curious headgear: a classic pediment broken by a circular notch, inviting frequent comparisons with the top of a grandfather clock Chippendale. A singular, if largely innocuous, presence in today’s icon-laden cityscape, the design was positively shocking when it debuted in 1979, when Johnson himself appeared on the cover of Time holding a model of the project, then another four years after completion. The image heralded the arrival of something new in American architecture: the fading of mid-century modernist flat-crowned towers and the beginning of the postmodern wave. 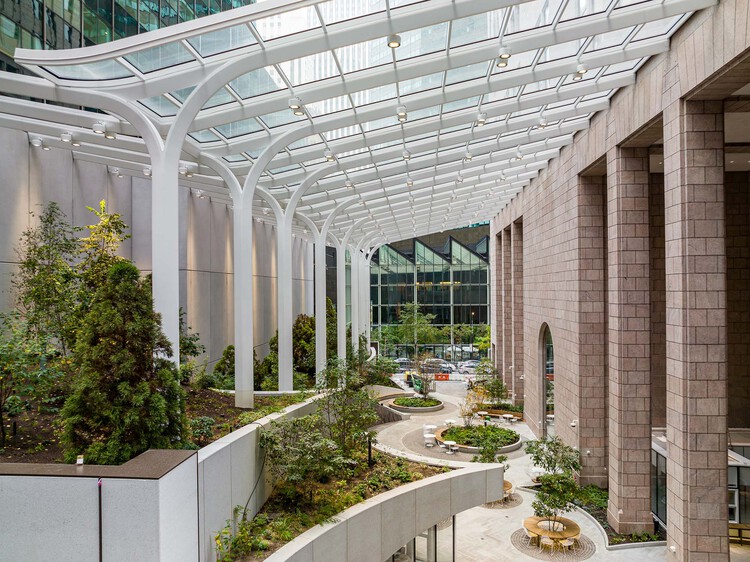 But that was then. “The building had many components changed over time,” says Craig Dykers, founding partner of the New York office of Norwegian-American firm Snøhetta. “It kind of took away from the original concept.”

After the renaming, various corporate tenants, extensive interior renovations, and transformation of the street-level portico and rear-facing arcade, the old AT&T faded into the history books. . Now, following its acquisition by development company Olayan Group in 2016, the building is once again in the running for urban transformation, with Snøhetta redeveloping the building’s entrance and public areas with the aim of reinventing Johnson’s tower to the 21st century.

The company does not reinvent the together tower. Following the takeover of Olayan, Snøhetta unveiled an early design – enveloping the entire lower trunk of the tower in a glass sheath – which had the opposite effect of the Time cover. The idea met with groans from curators and design enthusiasts, prompting the team to rethink their concept and focus instead on making the building work better for its users, without making it radically different from the ‘outside.

“We wanted to create a place that would not only be more efficient, but where the workers would be comfortable, that had a certain warmth,” explains Erik Horvat, general manager of Olayan. Instead of relying on a single commercial occupant, the development team sought to transform 550 Madison into a coworking-style multi-employer office complex, doubling its capacity from 1,000 to 2,000 while adding amenities that no Sony executive could have imagined. Especially since COVID, Horvat points out, “you have to have an environment that makes people want to come to work.” Creating this environment has become task number one for Snøhetta.

Alongside Gensler and Rockwell Group collaborators, who helped shape the sleek new interiors, the Dykers team crafted a revised plan with a dramatic ground-floor entrance and an impressive grouping of meeting rooms, restaurants and private rooms on the second floor: a sort of clubhouse for construction workers, with a pool table and fireplace. There are new windows on the west facade and a newly cut opening at the rear of the hall, but the real focus of Snøhetta’s efforts is not in the building, but behind it, in the north-south corridor connecting 55e and 56e Streets.

“It’s a POPS,” says Michelle Delk, Landscape Discipline Manager at Snøhetta. A common feature in Midtown, publicly owned private spaces are mini-parks built and operated by building management in exchange for a tax benefit. Some POPs are, to say the least, better than others – and Johnson’s was one of the latter: a dreary corporate alley, lined with underutilized shops on one side and usually vacant chairs on the other. Thanks to Delk and his team, the new space was remodeled, becoming an integral part of the 550’s new office-plus identity. “The idea was to really lighten it up, to make it more inviting,” says Delk.

Beneath a new glass canopy, supported by elegant crisp white bifurcated pillars, the reconfigured gallery transforms the dark no-place into an indoor-outdoor landscaped garden, complete with native plantings, water features, numerous seats and even a “steam pit,” a circular rock-covered dais that emits heated steam in the winter and makes the space a real attraction all year round. “We wanted there to be all those moments of discovery,” says Welk. Visitors can linger over the details, from the poetic inscriptions in the cobblestones to the subtle flecks of pink in the stone trim, echoing the pink travertine of Johnson’s Tower. The space is always a a curiously incongruous urban phenomenon, hovering uncomfortably between authentic civic amenities and a corporate playground, but it does so much more with far less space than almost any other POP. A more radical original, Snøhetta has managed to do something much bigger than refreshing a historic building, providing a promising model for bringing audiences back into POPS.